Mercedes-Benz announced a spectacular collision of peerless talents from the worlds of fashion, photography and Formula 1 for its Autumn/Winter 2015 fashion campaign.

The leading men are the ace racers, rivals and team-mates Lewis Hamilton – Formula 1’s newly-crowned World Champion – and Nico Rosberg. Starring alongside them is one of the fashion circuit’s hottest models and actress, Dree Hemingway – who as great-granddaughter of Ernest Hemingway, is herself a scion of adventure in the grand tradition. This new season paean to the siren calls of speed, sleekness and style has been masterminded by Collier Schorr, the Yale faculty member, and photographer nonpareil.

To shoot the campaign the trio was transported to the Sindelfingen wind-tunnel, a canonic site in the mythology of Mercedes-Benz, where its designs are tested against the uncompromising forces of nature. Aerodynamic efficiency meets exquisite aesthetics in the two motoring masterpieces – one classic, one brand-new – that the drivers are issued; Rosberg steers the brawny, muscular Mercedes-AMG GT while Hamilton takes the Mercedes-Benz C111, a still-revered gullwing experimental model developed during the 1970′s. High fashion – not to mention tailoring as perfectly precise as the Mercedes-Benz team-mates’s driving – screeches seductively into the pit lane courtesy of HUGO BOSS, outfitter of choice to Hamilton, Rosberg and Hemingway.

Produced to celebrate Mercedes-Benz’s longstanding sponsorship of the world’s finest fashion weeks – a blossoming roster that now numbers over 50 engagements in more than 30 countries. Collier Schorr for Autumn Winter 2015 is the sixteenth Mercedes-Benz fashion campaign, a tradition established to underline the commitment to the many international fashion events – including the Mercedes-Benz Fashion Weeks in Beijing, Moscow and Berlin as well as the fashion weeks in London, Milan, Paris and many others – that Mercedes-Benz is proud to support. Previous collaborators have included Nick Knight, Roe Ethridge, Mario Testino, Ryan McGinley, Peter Lindbergh, Tilda Swinton, Lara Stone, Karlie Kloss and Joan Smalls. This, though, is a champagne moment: the first time that Formula 1 drivers have taken their place on the Mercedes-Benz fashion podium.

Lewis Hamilton and Nico Rosberg are drivers for the UK-based Mercedes AMG Petronas F1 team. The team won 13 of the first 16 races of the 2014 F1 season, then accelerated away to take the Constructors Championship – with Hamilton and Rosberg pitted against eachother all the way in the battle to be crowned Champion driver.

The descriptive key words for the Mercedes-AMG GT are: Dynamic. Handcrafted. Passionate. It stands for the aim to reach pure perfection, to challenge and to win. The new GT combines driving dynamics, formidable agility and first-class racetrack performance with superb everyday practicability. The entire production process has a handcrafted character: “One Man – One Engine”. It has been passionately manufactured by Sportscar enthusiasts for Sportscar enthusiasts. Born on the racetrack. Raised on the Street. Pure Performance expresses the look of the Mercedes-AMG GT classic campaign focusing on positioning the car as a brand shaper to underline the sportiness of Mercedes-AMG. The central statement of the classic communication is “Handcrafted by Racers.” 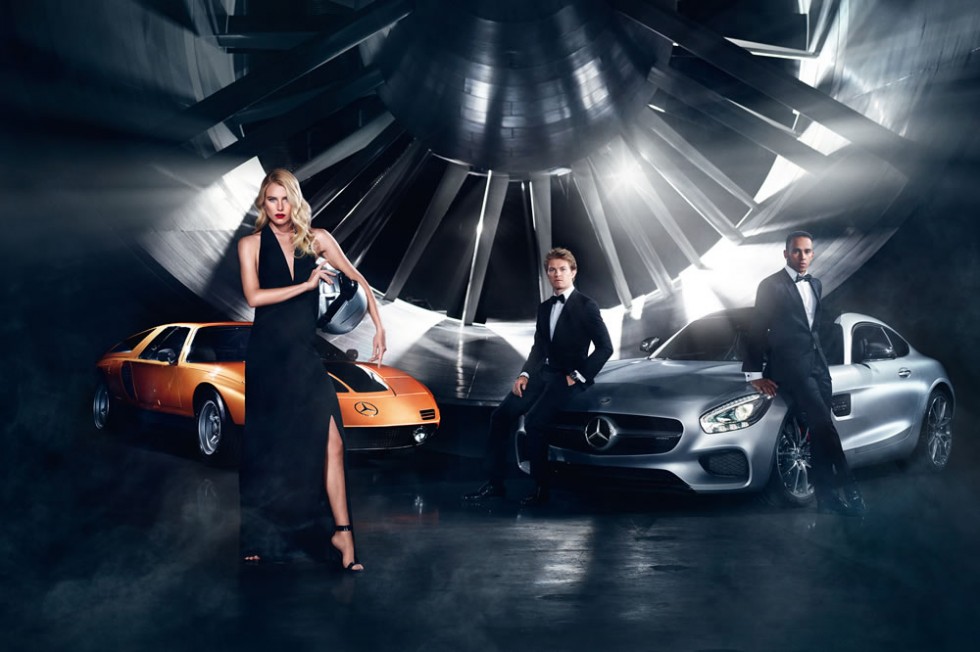 In September 1969 Mercedes-Benz amazed the public at the International Motor Show (IAA) in Frankfurt with the presentation of the C 111 experimental vehicle. The Mercedes-Benz brand was somewhat conservative back then, with its restrained, elegantly styled cars, and no-one would have expected it to come up with such a bold and expressive design. As such the C 111 contributed towards the rejuvenation and enlivening of the brand’s style. The body made of glass-fibre-reinforced plastic (GFRP) with gullwing doors and striking orange-coloured paintwork was just one of its highlights. On the inside it pampered passengers with a tastefully designed, comfortable ambience. It was therefore more akin to a Gran Turismo than to a spartan super sports car. As a near-series experimental and research vehicle, it demonstrated the development expertise and innovative potential of Mercedes-Benz. The C111 had its appearance in the fashion world in the 1970’s.

During her highly successful modelling career Dree Hemingway has shone on the runways for Givenchy, Chanel and Lanvin (among many others), appeared regularly in editorial and on the covers of international editions of Vogue and Harper’s Bazaar. Dree works with many of the world’s leading photographers including Bruce Weber, Peter Lindbergh, Ines Van Lamsweerde & Vinoodh Matadin, Glen Luchford & Alasdair McLellan and has appeared in prestigious fashion campaigns for Valentino, David Yurman, Paco Rabanne & Jean-Paul Gaultier, to name a few. Most recently Dree has taken on a new creative role, as she was appointed Women’s Global Ambassador for the American fashion & luxury brand Cole Haan in 2014. As an actress Dree received accolades and critical praise for her first breakout performance and lead role in Sean Bakers 2012 Film Starlet. This was followed up by subsequent roles including appearing in the French film Nous York in 2012. Dree ‘s latest films roles include While We’re Young with Ben Stiller by acclaimed directed and oscar nominated Writer Noah Baumbach and Alex Perry’s Listen Up Philip, due for general release in 2015.

Lewis Hamilton’s first car was radio-controlled, and he began racing it aged six. A year later he appeared on the British television programme Blue Peter and effortlessly won against far more seasoned competition. A prodigiously gifted racing driver, Hamilton progressed via go-karting – he won the 2000 European championship, racing alongside teammate Nico Rosberg – through to the discipline’s pinnacle: Formula One. Racing for Mclaren with Mercedes-Benz power, Hamilton won the F1 title in 2008; in 2014, with MERCEDES AMG PETRONAS, he has become only the fourth British driver to win two F1 world titles. Unquestionably amongst the most exciting and charismatic drivers in the history of motorsport, Hamilton is a legend in the making.

German Nico Rosberg has racing in his blood: his Finnish father, Keke, won the 1982 F1 World Championship. Rosberg rose through the ranks of karting and junior racing before winning the GP2 Series in 2005, which earned him the change to progress to Formula1. He won his first Grand Prix for Mercedes in China in 2012, adding the prestigious Monaco and British Grands Prix in 2013. During 2014, he was locked in a relentless and compelling duel for world championship title with his team-mate and rival, Lewis Hamilton. Rosberg scored six wins and eleven pole positions on his way to a gracious second place in the championship.

Collier Schorr, photographer and film director.The senior photography critic and faculty member at the Yale University School of Art, Collier Schorr has spent three decades navigating the nuances of gender through her startling and thoughtful photographic practice. Her portfolios have covered subjects as diverse as wrestling, masculinity in the military and her latest book 8 Women — while her fashion photography has graced the covers of titles including The New York Times Style magazine, ID, Another Magazine, Self Service, and Fantastic Man. She is represented by the prestigious 303 Gallery in New York. Her work is held in public collections including MOMA, the Whitney, and the Walker Art Center. She has undertaken commercial commissions for fashion houses including Bottega Veneta, Jil Sander, Brioni, and Y-3. She lives and works in New York City.