British Prime Minister David Cameron is not a frequent visitor to the land Down Under, the place where, according to Prime Minister Tony Abbott, women glow and men wear dad jeans to receive foreign heads of state.

Mr Cameron arrived in Sydney from the world’s biggest fancy dress event, also known as the APEC summit, early on Friday, and was briefed on Mr Abbott’s penchant for lycra before breakfast. So he was understandably a little taken aback when he was welcomed to the Emerald City by a man dressed like Barack “I look very sharp in jeans” Obama.

As G20 host, Mr Abbott kicked off the summit with patriotic panache by rocking a pair of iconic, mid-rise, dark-rinse RM Williams jeans for a light stroll around town with Mr Cameron, who was dressed a little more sharply in dark, relaxed-fit chinos.

Ten points for supporting Australian-owned wares but, when it comes to denim, Mr Prime Minister, you’re doing it wrong. No, sorry, you’re doing it like you’re at the G20 … last season. You bet you are. 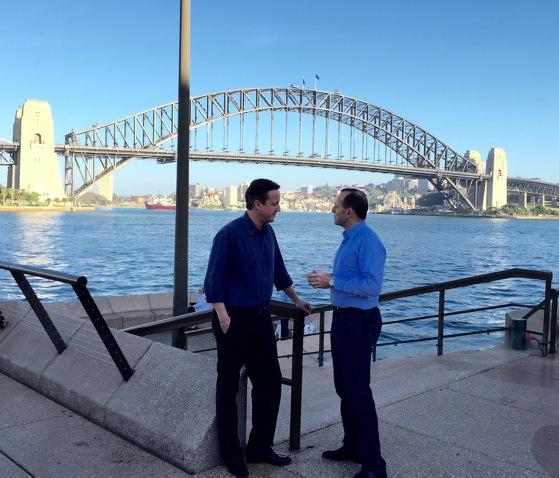 Denim, like leather a few years ago, is making a huge resurgence thanks to the recent Resort 2015 collections.

Double denim is now on trend. Not Britney Spears and Justin Timberlake circa the 2001 American Music Awards, but a full uniform of dark rinse twill is the new Canadian tuxedo. So are patchwork jeans but, one step at time, perhaps pass them on to a true leader like Foreign Affairs Minister Julie Bishop.

Mr Abbott, unlike Mr Obama who took five years to realise only Jerry Seinfeld should wear Levi 501s with sneakers, has at least got the new denim basics right up top.

However, the cut and style is too relaxed for a man who can keep up with Wolverine in the gym. You may be a dad, Mr Abbott, but leave their jeans alone and approach your wardrobe like you do the economy, welfare benefits and the carbon tax – embrace a lean, tapered cut.